Table of Contents
Since Flash's change to AD, I have had zero fun games with him. There is no threat of dying, and thus no excitement comes from playing him. I can't even bring myself to play him anymore. Just build anything AD that has on-hit-effects and you should be fine. RIP Flash </3 Ignore anything you see below this line it is outdated and here for reference.

Flash ever since my first week of Infinite Crisis. He's my favorite hero in the Justice League and his contributions in Crisis on Infinite Earths are incomparable. Although he was nerfed when F=MA no longer activated

Blue Scarab (3)'s passive, from the ashes he has risen.

Flash uses a skill he gains the Speed Force effect, which grants him 4% Move Speed for 2.5 seconds. Speed Force can stack up to 5 times and gaining a stack will refresh the duration of all stacks.
Passive: The

Flash gains Power Damage based on his Bonus Move Speed.

Flash is so overpowered his passive has a passive. He gains 12% (at level 1, 30% at level 5) Power Damage. This is very under-appreciated IF it even gets noticed.

When running from or chasing an enemy, you can optimize Speed Force's movement buff by watching it tick down from 3 to 2 to 1 just above your spells. When it reaches 1 second left, use another spell and it will bump it back to 3 seconds and also get you the next level of your passive.

More often than not, you will be using the full range of this spell. When you are fighting a melee champion, I highly recommend placing the tip f your spell just behind the enemy so you will have a low cooldown. It allows this spell to go past the limit of 40% so if you have the cooldown on [[Fatality's Energy Lance (4)]] then you will have another Flash Attack up in half the time.

It doesn't really matter which spell you max first as long as it is F=MA or Flash Attack. Both are great damage choices and it's really up to your preference. I have 20 levels of experience with

Flash and I feel like I get better results when I level F=MA before Flash Attack
On the other hand, solo bot laners should max this skill first. It allows you to clear a wave faster than F=MA (this won't even kill the melee minion at max level) and if you can tag the opposing laner with it you can pop your other spells for a positive trade. You need to play patiently, dodge skillshots, and poke with your dash and punches when you can.

Flash attacks at maximum attack speed (3 attacks per second) for 4 attacks or for 3 seconds. During this time, the Flash's Basic Attacks deal only one quarter of their base 15 Attack Damage, but deal an additional 20 Power Damage per hit.

Psi-Scimitar (3) during it. If they start to run, use Flash attack, slap them, and back off if you're unsure of enemy positions.

Flash gains 5 Attack Armor and Power Armor and can move through enemy Champions for 4 seconds. Enemy Champions that he damages or moves through lose 20% Move Speed for 2 seconds and grant the Flash a stack of Speed Force. Champions may only be effected once per activation. While active, Flash Attack changes from a rush to a dash (allowing it to pass through walls).

There are two big things to this spell; A) the slow and B) passing through walls. Most times you will be using this for the slow. It's incredibly difficult to think of an instance when slowing an opponent is not useful. It's only combat effective.
Allowing you to pass through walls with Flash Attack is the more complicated part (keep in mind that you need to use Hyper Vibration for this to happen). You need to plan ahead and try to figure out if you'll need this to escape or not because the cooldown could bite you in the butt.

This maelstrom will destroy teamfights if you can place it properly. This is difficult to place, but I find the best spot is just behind the enemies trying to get onto your carries, but in front of the enemy carries as to zone them from the fight. Below is a sloppily drawn image in paint portraying this. 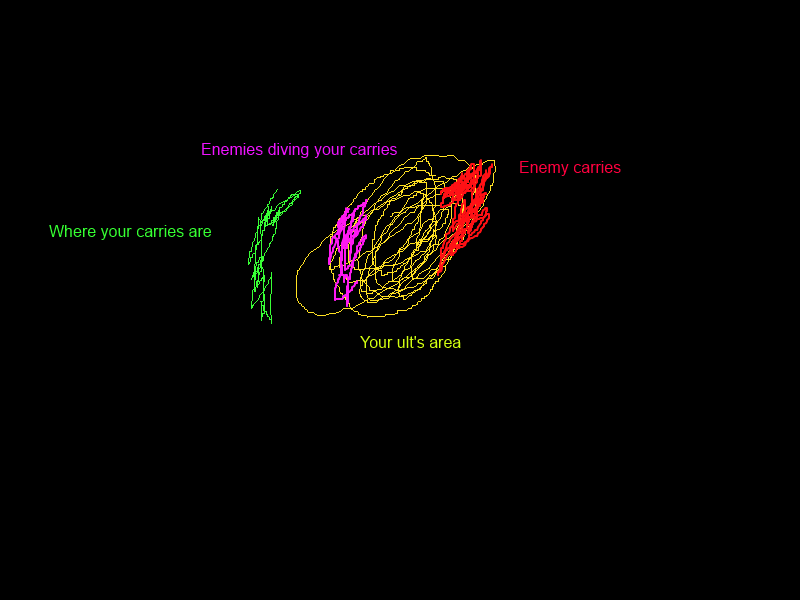 S.T.A.R. Labs Mod Enhanced Health Cosmic Belt +75 Health
This is just a great early game item. Gives a good bit of Power Penetration for that little bit of oomph you need at the start. The 75 health is just a bonus.

Flash's cooldowns so I lean towards the +15 Power Damage. Going from level 2 to 3 is a substantial increase in you damage output. Work on buying this before your

Psi-Scimitar (3), but if you don't get the gold to buy the active settle for upgrading the

S.T.A.R. Labs Mod Empowered Psi-Scimitar After skill use, your next attack deals 50 + 50% Power Damage or 150% base Attack Damage. (Tier 3)
This has always been a staple item for

Flash. Now it's just a bit more difficult to utilize. F=MA no longer activates the damage. You need to remember to use a basic attack after F=MA to activate the extra damage. Upgrade the levels of

Psi-Scimitar (3) when you don't have enough credits to buy [[Fatality's Energy Lance (4)]].

Flash's early game can be very tricky. Focus on being a part of kills and learn when it is okay to farm.

Basic Champion Interactions
If you read my

Robin guide first, you would expect to see a list of 1v1 matchups here. Instead of that, I am going to briefly describe matchups you should avoid. This is all dependent upon credit values and remembering to utilize [[Fatality's Energy Lance (4)]]'s active.

Bruisers/Enforcers
Most enforcers you won't be able to fight; this excludes people that do things like tank

Green Arrow.
Obviously, disregard this if you are 3000 credits above the strongest enemy.

Bruisers are less bulky than tanks, but also do more damage.

Blasters/Assassins
You will be able to kill them 1v1 if you dodge their main damage;

Star Sapphire's predator. She will be the blaster you have the hardest time with.

Assassins can be a bit more tricky since you are one. It will usually come down you player skill, knowledge, and as always, credit difference.

Marksmen
Again, this is like the blasters. Midgame you have a big advantage since you get a power spike from finishing your [[Fatality's Energy Lance (4)]] and

Psi-Scimitar (3). You should be able to get your burst down, run away to let your cooldowns come up, and still be able to chase them back for a second round of deadly burst.

Controllers
Controllers are usually packing lots of crowd controls (stuns, slows, etc.) so I would just avoid them. They tend to not get a lot of power so if they're the only target available chip away!

If you've enjoyed the guide, here are a few things you can do to help me out!