Starro 2 votes
We're looking for a Arcane Supergirl guide worthy of being our Editor's Pick. Want to see your guide here, prominently displayed to every visitor to this page? Go create a guide and show us what you can do!
Default
The below feature is still being tested. Expect bugs and wacky behavior.
Vote for who Arcane Supergirl is strong and weak against. This will be particularly useful once draft/ranked matches are available.

The damage dealt by Arcane Supergirl's Meteor Drop is increased by 1% for every 2% of health that the target is missing.

Arcane Supergirl places a fireball that increases in range and speed over 1s. It then releases, dealing 70 Power Damage to all enemies hit. Use the skill again to fire early.

If it passes through Firewall, then its damage is increased by 30%.

If Pyrolyze or Breath of Rao pass through the wall, Firewall's cooldown is reduced by 2s.

If the missile passes through Firewall, then it will Stun the target for 1s.

Arcane Supergirl summons a firebird that, after a brief delay, smashes into the ground dealing 100 Power Damage in an area. This skill can be used up to 3 times within 6s.

Trigger (Cooldown: 6s) - When Arcane Supergirl uses a skill, her next Basic Attack within 4s will set her target on fire, dealing an additional 40 Power Damage over 4s. 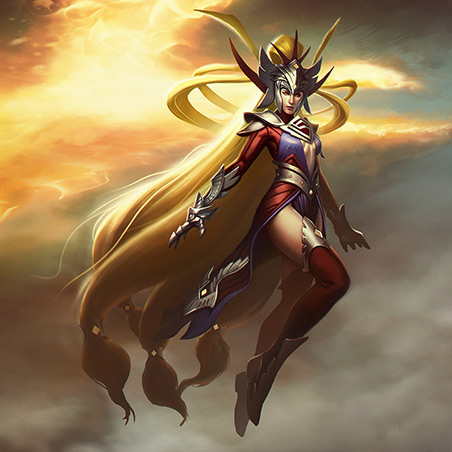 On the day Kara Zor-El was to be inducted into the ranks of Heralds of Rao, her life was shattered. A traitor revealed the location of the Shrouded Realm of Krypton to the Black, and servants of that evil realm poured into Krypton. The Hidden Lords of Krypton and the Kryptonians fought back bravely, but the forces of the Black were limitless.

When all hope seemed lost, Alura, Kara's mother and leader of the Heralds, commanded her Flamebird mount to snatch Kara and take her away. Unable to escape the beast's talons, she watched helplessly as her mother was struck down. As the servants of the Black closed in on her, the beast teleported to Earth, a planet in the lower realms. Her home forever lost, she swore that the last Herald of Rao would have revenge on the Black, no matter the cost.

Kara possesses the remarkable resilience, stamina and strength that were the hallmark of all Kryptonians. Due to those traits, the people of Earth have taken to calling her, "the Supergirl". In addition, due to being of the House of El, she manifests the "blessings of Rao", abilities to influence and direct light and flame.