Aquaman 2 votes
We're looking for a Blue Beetle guide worthy of being our Editor's Pick. Want to see your guide here, prominently displayed to every visitor to this page? Go create a guide and show us what you can do!
Default
The below feature is still being tested. Expect bugs and wacky behavior.
Vote for who Blue Beetle is strong and weak against. This will be particularly useful once draft/ranked matches are available.

Blue Beetle's X-Ray Vision grants 30 Credits and reduces cooldown by 5 whenever he kills a Surveillance Camera.

For 8 seconds, your Champion has increased vision range, can see enemies in Stealth or on stealth pads, and can see through walls.

Blue Beetle launches a Scarab Scanner to the target location, where it grants vision.

The Scanner will explode and mark nearby enemies for 6s when the skill is used again, when 30s pass, or when Blue Beetle enters Infiltrator Mode.

Using a skill or Basic Attack on a marked enemy will consume the mark to deal damage as if the enemy was struck by Reach Directive.

Blue Beetle emits a hypersonic blast, Fearing drones and creatures, and reducing enemy Champion's damage by 10% for 2 seconds and marks all targets for 6 seconds. Damaging a marked enemy will consume the mark to deal damage as though the enemy was struck by Reach Directive.

Blue Beetle rushes in target direction. While rushing he turns and fires up to 4 energy pulses at the closest enemy he is moving away from. Each pulse deals 25 Attack Damage, which is reduced by 50% when hitting an enemy more than once.

Blue Beetle attacks with his Mandible Taser, dealing 85 Attack Damage and reducing the target's Move Speed by 65% which diminishes over 3 seconds.

Ranged Mode: Blue Beetle converts to Infiltrator Mode, becoming a melee attacker with different skills and gaining 20 Move Speed. Ranks in Infiltrator Mode increase the potency of all skills in that form, except for the passive.

Trigger (Cooldown: 12s): After using a skill, Blue Beetle's next Basic Attack within 6s will deal up to 30 True Damage. It deals max True Damage if your target has full health. Each 1% of Max Health the target is missing reduces this damage by 1%.

Trigger (Cooldown: 12s): After using a skill, Blue Beetle's next Basic Attack within 6s will deal up to 30 True Damage. It deals max True Damage if your target has no health. Each 1% of Max Health the target has reduces this damage by 1%. 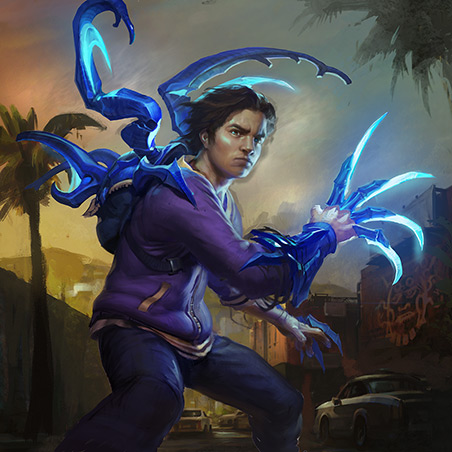 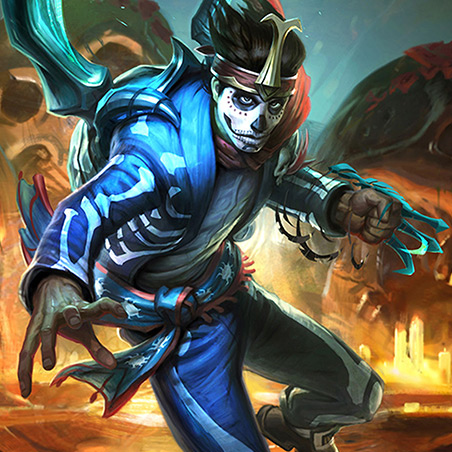 Blue Beetle is a hybrid champion. He begins as a marksman, blasting enemies from afar, but can swap to Infiltrator Mode via his ultimate to change into a melee assassin with new abilities. Once Blue Beetle gains his ultimate, he can toggle between ranged marksman and melee assassin at will.

Jaime Reyes wandered into a fight between warring super-human gangs and, desperate to escape, stumbled across the object which they were fighting over: a strange blue scarab. The scarab bonded to Jaime and instantly covered his body with battle armor. Protected, he fled to safety.

After his escape, Jaime was horrified to discover that while the armor wasn't permanent, his bond to the scarab was. Worse, he discovered the scarab could "speak" in his mind. It revealed to Jaime that it was called Khaji-da and it was a living tool of conquest created by the Reach, an alien empire bent on conquest. Designed to control its host's mind, Khaji-da intended for Jaime to be a tool of the Reach, paving the way for their invasion. However, the scarab was damaged, much to Jaime's luck, and he retained free will. Now he struggles as Blue Beetle, misunderstood teenager and hero.