Supergirl 1 votes
We're looking for a Atomic Joker guide worthy of being our Editor's Pick. Want to see your guide here, prominently displayed to every visitor to this page? Go create a guide and show us what you can do!
Default
The below feature is still being tested. Expect bugs and wacky behavior.
Vote for who Atomic Joker is strong and weak against. This will be particularly useful once draft/ranked matches are available.

Atomic Joker uses a charge to toss a peel to the ground. The first enemy Champion or creature to touch it is Knocked Down for 0.75s. Targets are immune to peels for 3s after being Knocked Down.

Atomic Joker launches a balloon at the ground, dealing 50 Attack Damage over 4s to targets in the area, and Revealing them.

Atomic Joker fires a salvo of rockets at the 2 closest Champions every 1s, up to 4 times. Each rocket deals 60 Attack Damage. Each Champion can be hit by 1 rocket per salvo, up to a total of 240 Attack Damage per target.

When defeated, Atomic Joker detaches from Gaggy, becomes Invincible, and bounces around the battlefield for 5s. Each bounce deals 25 Attack Damage to nearby enemies, for a total of 200 Attack Damage. 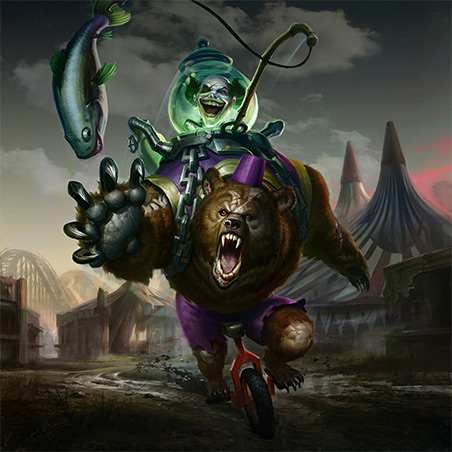 When they broke into an abandoned military bunker, those blighted survivors of the nuclear war couldn't have realized what they were about to unleash on themselves. Within its derelict walls, they discovered a hibernating computer system. Sensing their movements, the system activated and they found attached to it the head of the Joker suspended in a preservation vessel. The Joker welcomed them with a cackle and told them it was time to build the future.

The Joker told them that the military had wanted to use his unique mind to come up with nuclear war scenarios. Displaying a brutal pragmatism that the Joker appreciated, they put his head in a preservation vessel and got rid of the superfluous parts. Now that the serious world was dead and gone, he told the survivors, it was time to build a new crazy one. So desperate were the survivors that they decided to listen to the Joker and began building a new community within the bunker.

As the community prospered, the survivors increasingly followed the Joker's orders without question, until they eventually had no will of their own. When the Joker commanded that his vessel be attached to the back of one of his minions, so that he could better see the world he was building, many vied for the honor.

The gruesome combat that took place left but one survivor: a scarred, voiceless brute who the Joker named Gaggy. From his spot perched on Gaggy's back, the Joker now rides through the nuclear wasteland, always looking to expand the borders of Jokertown.

The Joker of Earth-17 is the ultimate combination of brains and brawn. His minion Gaggy blindly follows any mad command to come from the Joker, without concern for himself.