Starro 2 votes
We're looking for a Flash guide worthy of being our Editor's Pick. Want to see your guide here, prominently displayed to every visitor to this page? Go create a guide and show us what you can do!
Default
The below feature is still being tested. Expect bugs and wacky behavior.
Vote for who Flash is strong and weak against. This will be particularly useful once draft/ranked matches are available.

Flash's Super Speed allows your Champion to move even faster.

Gain 25% Move Speed and move through enemies for the next 4 seconds.

The Flash rushes to target location, dealing 60 Attack Damage to all enemies he passes through. The cooldown of Flash Attack is reduced if he rushes less than Flash Attack's maximum range, down to a minimum of 40% at half range.

If Hyper Vibration is active, this skill changes to a dash and can pass through walls.

F=MA's attacks apply Hit Effects, but the bonus Attack Damage does not apply to structures.

For 3s Flash Attack changes to a dash and can pass through walls. Damaging or touching an enemy Champion grants him a stack of Speed Force, and his target loses 20% Move Speed, which decays over 2s. Champions may only be affected once.

When the Flash uses a skill he gains a stack of Speed Force. Speed Force grants him 2.5% Move Speed for 2.5s, and can stack up to 5 times.

The Flash gains Bonus Damage based on his Move Speed (+1% per 10 Bonus Move Speed). 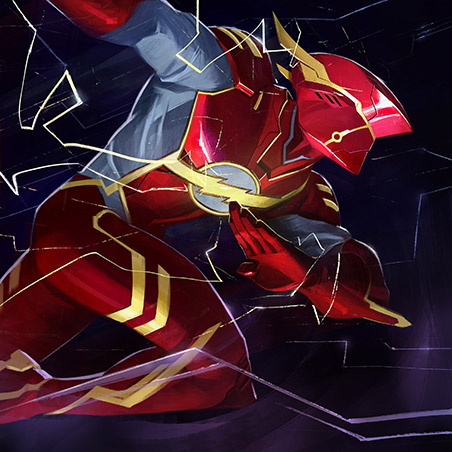 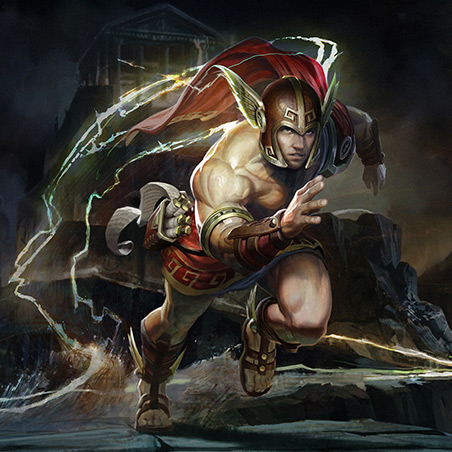 Beloved by the people of Central City and gifted with a brilliant mind, the Flash uses super speed to dash from threat to threat.

A police scientist in Central City, Barry Allen was caught in a chemical explosion when a lightning bolt crashed through his laboratory windows. Able to control the motion of every molecule in his body, Barry moves at extreme speeds, phases through solid matter, and whips up whirlwinds.