Supergirl 1 votes
We're looking for a Atomic Green Lantern guide worthy of being our Editor's Pick. Want to see your guide here, prominently displayed to every visitor to this page? Go create a guide and show us what you can do!
Default
The below feature is still being tested. Expect bugs and wacky behavior.
Vote for who Atomic Green Lantern is strong and weak against. This will be particularly useful once draft/ranked matches are available.

Deal 75 True Damage to target enemy drone or creature and you are healed for 30 and gain 12.5% Move Speed for 3 seconds. Environmental objects can also be targeted and are destroyed after healing you.

Atomic Green Lantern shoots his construct hand out to grab the first enemy hit. They are dealt 60 Power Damage, pulled back to him, and Stunned them for 0.35s.

Shards of Will (E)

Atomic Green Lantern gains a Shield that blocks 50 damage for 5s. Nearby enemies with Radiation Sickness have an additional stack added, and the Shield is increased in strength for each enemy affected: Champions add 20%, drones and creatures add 5%. The maximum bonus is 50%.

Damaging an enemy with a skill applies a stack of Radiation Sickness for 6s. At 4 stacks, all stacks are consumed and the enemy loses 40% Move Speed, is dealt 40 Power Damage over 3s, and is immune to further stacks for a brief time.

Trigger (Cooldown: 4s): Striking an enemy with a Basic Attack applies a stack of Radiation Sickness. 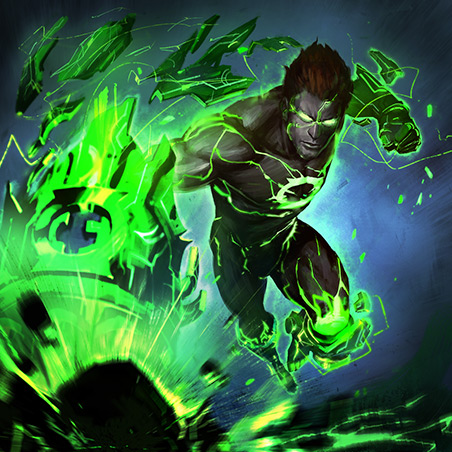 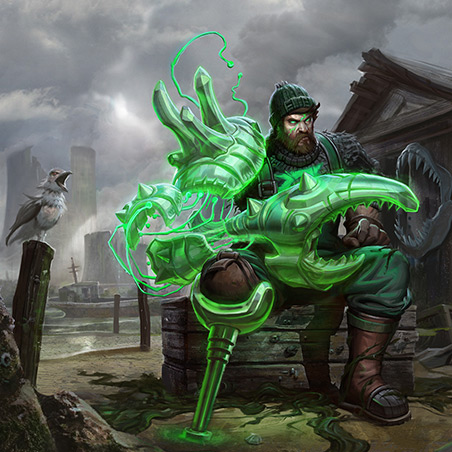 Barely surviving the nuclear firestorm, Atomic Green Lantern was nearly killed while trying to save others. While holding aloft tons of rubble that pinned the survivors, his ring's construct suddenly shattered and he was crushed by the falling debris. Hal awoke days later in an emergency clinic to a shocking discovery: his right arm had been amputated. It had been too badly crushed and had to be removed before it became gangrenous. In addition, his now powerless ring was crushed into his chest and could not be removed without risk to his heart. This left Hal a broken man.

Hope returned when a mysterious figure visited Hal in the clinic. He said that he had discovered a radioactive isotope born of the nuclear war that might repair and repower his ring. However, this would not come without consequences. Hal agreed without a second thought. With the isotope in place, his ring's powers returned, although his constructs lack the definition they once had. He only hopes now that he can help his world rebuild before the radiation kills him.