Supergirl 1 votes
We're looking for a Atomic Poison Ivy guide worthy of being our Editor's Pick. Want to see your guide here, prominently displayed to every visitor to this page? Go create a guide and show us what you can do!
Default
The below feature is still being tested. Expect bugs and wacky behavior.
Vote for who Atomic Poison Ivy is strong and weak against. This will be particularly useful once draft/ranked matches are available.

Atomic Poison Ivy deals 40 Power Damage to all enemies in an area around her.

Toxic Growth: Using this skill against a target with Toxic Growth grants her 20% Move Speed for 1.5s.

After a short delay, Atomic Poison Ivy summons a wall of thorns for 3s. Enemies that touch the wall lose 40% Move Speed, which decays over 3s.

Secrets of the Forest (R)

Atomic Poison Ivy shrouds an area around her in fog for 10s. She and allies within the area gain 10 Power Armor. Allies within the fog are Stealthed as if in a Stealth Pad, but she remains visible.

She applies Toxic Growth to enemies in the area every second.

If Atomic Poison Ivy takes no damage for 10s, she will gain a Shield that blocks 60 damage. While Shielded, enemies that Basic Attack her have Toxic Growth applied to them for 5s.

She applies Toxic Growth to any target she damages with a skill, or if the target already has Toxic Growth, her skills consume it for bonus effects. 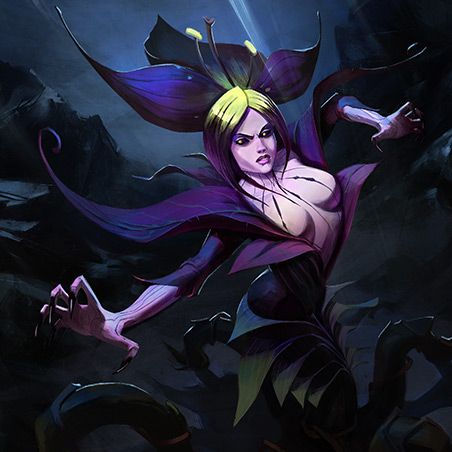 As the radioactive fallout of the nuclear war withered the world's plant life, Pamela Isley was overwhelmed by the 'screams' of the dying plants and fell into a catatonic state. Upon awakening, she found herself transformed into something more plant than woman, and surrounded by a strange forest of mutated vegetation that had adapted to the bleak radioactive landscape. She realized she now had a connection to the plants that had survived, almost as if she could feel their thoughts and will. This connection to the 'Green' brought about an epiphany in her. She was now the defender of what plants remained.

Through her, man would learn to fear nature, and she would ensure that man would never threaten the green again.

Although possessing a striking beauty, Atomic Poison Ivy does not wield seduction as a weapon. Instead, she uses her radioactively gifted powers to protect herself, obscure her allies, and entrap and or poison her foes.